We specialize in production of armored vehicles with high levels of ballistic protection – up to VPAM 11/ Stanag 3. Thanks to using modern materials and technologies we achieve the minimum possible weight of the armor. 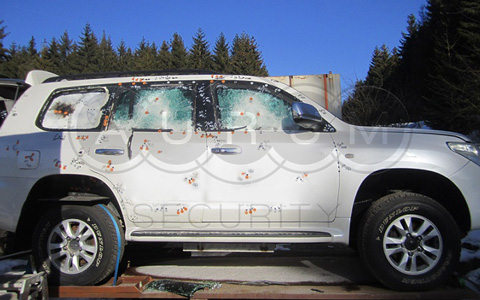 As of 2013 we are the only company in the world which has passed the certification of the civil vehicle according to the ballistic class VPAM 10. This level includes protection from all widespread soft, armor-piercing and armor-piercing incendiary projectiles including bullet B32 for the sniper rifle Dragunov.

We have certified our armoring design at the iABG testing facility in Germany as this certification is the most thorough and therefore the most valued by professionals and such organizations as NATO, UN, etc. 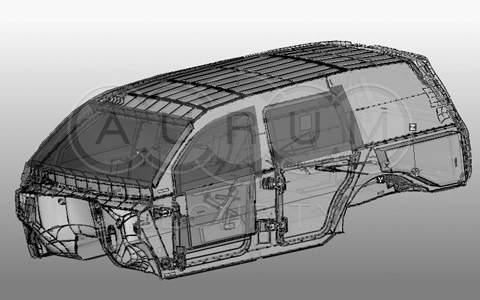 iABG conducts the certification of a vehicle as follows:

The 3D model of the vehicle is analyzed in order to determine the potentially weakest points and firing angle in each of these points. According to the latest standard BRV 2009, the angle can be arbitrary – earlier it could be only 45 or 90°. The firing angle depends on the type of the bullet and is always chosen according to the principle of maximum probability of the penetration.

The manufacturer of the vehicle can impose restrictions, for example, the firing of the roof only at the angle of 45° or glasses in «installed position», i.e. parallel to the ground. In the design of our vehicle we did not make any compromises and were firing the whole vehicle under the worst conditions, including roof and glasses at 90°.

After that the vehicle is fired at all planed points with different bullets – both soft and armor piercing. Potentially weak areas such as edges of the glasses, door frames, bolt joints, etc., are checked many times. The velocity of each bullet is registered and the result of every shot is thoroughly analyzed. In total we subjected our vehicle to 500 shots in order to ensure that no bullet will penetrate the vehicle.

You can find more information about different levels of ballistic protection here.

In order to provide extra safety even in the vehicles with highest protection levels we make front windows operable so that passengers do not need to open the doors, for example, to handle over the documents.

Besides that even in B6 / VPAM 7 vehicles we usually install glasses of the VPAM 8 / Stanag 2 protection level; firstly, such glasses can withstand even armor piercing bullets of Kalashnikov, not only regular ones, and secondly, it can withstand even machine gunfire, not only 3 shots as required by the standard. Holding 3 bullets might not be enough - according to the statistics during attacks 80% of the shots are targeted at the glass.

This way we provide the passengers of our vehicles the biggest chances to survive the attack.