How to Distinguish an Armored German Vehicle From a Regular Vehicle 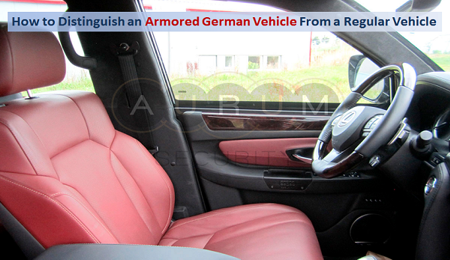 When planning to buy a new car, one thought that pops up in the mind of politicians, diplomats, government officials and businessmen whether they should buy a regular vehicle or an armored one. Well, both of them serves the purpose of transporting an individual or goods from one place to another; however, armored German vehicles provide the highest protection to the occupants from any kind of ballistic and blast attacks. They are multi-functional vehicles frequently used by companies and individuals to transport precious or valuable items and even large amounts of cash.

But Why Armored Cars?

The world is constantly facing various levels of threats and so are the high reputed individuals from the terrorist groups or from the anti-social elements. The people who deal with such threats include politicians, government officials, celebrities, and important dignitaries. In order to protect their lives and move safely from one place to another, they use armored vehicles for their transportation.

How to distinguish between armored vehicle from a regular vehicle?

It is the game of armoring and technology!

It is the armoring process, armored parts and technology that play vital roles in the making of an armored vehicle. The walls, doors and the ceiling of armored cars are made of hot-formed ballistic parts. These parts are created using CAD/CAM technology, which provide them long life while making the vehicle the most protected one for transportation.

At the same time, it is taken care that the gross weight of the armored car is only 200 kg heavier than a typical certified VR7 vehicle.

Ballistic Glass –The glass that is used in the armored German vehicle is slightly different from the ones that are being used in the regular vehicles. These glasses can withstand even armor piercing bullets of Kalashnikov along with the regular ones. They are also capable enough to withstand machine gunfire, not only 3 shots as required by the standard. Additionally, the glass can withstand explosives of various capacities, even 15 kg of TNT, as well as shots from any angle including 90 degrees.

The armored German vehicles also come equipped with a multi-terrain ant-lock system. As per the needs and requirements, they can also be customized with run flat tires, reinforced door hinges, explosion mitigating floor and several other standard protective features. Their fuel consumption is as follows: 30.0 l/100km (combined), 32.0 l/100km (urban) and 26.0 l/100km (extra-urban). Fuel used is petrol.

These are some features which make armored German vehicle different, unique and safe from the regular vehicles.